Despite citizen complaints about boats believed to exist illegally in Boca Ciega Bay, Gulfport police say they can do little to remove the boats anchored just off Gulfport beach and behind the houses fronting the water along Shore Boulevard.

One solution, created 11 years ago by former city manager Tom Brobeil, is one council will not vote to fund, according to city staff.

Boats in Boca Ciega Bay remain often unchecked for illegal human waste disposal and anchored to the bottom rather than tied to moorings, although research suggests moorings offer an environmentally-friendlier way to secure boats. The boats in the bay, almost 30 on average, do not appear to belong to cruisers who travel from city to city, but often appear to be project boats or live aboard boats that do not move.

Local residents and the Gabber have sent the police photos of these boats and asked why they remain in Boca Ciega Bay.

Sergeant Rob Burkhart, who oversees the city’s marine patrols, responded via email and in person.

“Unfortunately, as much as many would like to see these boats go away, until the rules/laws change, I don’t believe we have much power to do anything but keep an eye on them and enforce the current rules/laws on the books,” he said. “To the boaters’ credit, they are very knowledgeable when it comes to marine rules, laws and ordinances. For the most part, they know what they can and can’t do.”

Burkhart used the boat Gone With the Wind as an example.

“The boat does not have a FL number, however it is a ‘Documented Vessel’,” he said. “The Documented Vessel number is DO1235518. If you will notice in the photograph, the vessel does not have a standing mast, however the mast is on the boat, it is just not raised and attached. You can see this in the photograph on the starboard side with the sail wrapped around the mast. As this vessel sits, it is legal, and could sail under its own power if the mast is raised and attached. Since the boat is documented, and the registration is current, I do not believe there is anything that can be done about this vessel.”

The Gabber learned of at least one resident complaint about these boats. Dan Bucchioni brought many of these same boats to the city manager’s attention in March, at which time Sergeant Burkhart responded to the complaints.

“I believe Mr. Bucchioni may have some frustrations because there are more and more boats anchoring in our waters,” he said. “Many of these boats are old, and are not in the best of shape, however I did not see any that would qualify as a derelict vessel. I also have no doubt that many of these boaters are dumping their waste into the water.”

Police cannot legally board a boat with no one aboard, Burkhart says, which prevented him for determining the legality of how boaters disposed of their waste.

Burkhart said the boats remained within the law.

“I sympathize with Mr. Bucchioni because many of these boats are an eyesore and are increasing in numbers, however what he is claiming is very difficult to prove. If the registrations are up to date, and the owners are not there when we patrol, there is very little we can do until the rules change.”

In 2004, Gulfport’s city manager, Tom Brobeil (who has since retired), created a harbor management plan to help address citizen complaints not unlike the ones outlined here. That plan included a mooring field, which city council has yet to implement.

“The harbor management plan was based on the creation of a mooring field,” current city manager Jim O’Reilly said. “This past year, city council directed staff to pursue grant funding. It was not previously budgeted.”

The council agreed to move forward with the mooring field but did not budget any money for it, telling the city manager to move ahead only if his staff could get grant funding for more than half the project’s cost.

“At times it’s been both a funding issue and a political issue,” O’Reilly said. Now, he says, it remains a funding issue, as the state approved the city’s submerged land lease earlier this year.

Although the initial mooring field plan included 50 moorings, the city has scaled down the project to 25. That iteration of the mooring field would cost the city $75,000 if it could receive $125,000 in grants. This would include buying a pumpout boat to ensure all moored boats did not pump their waste overboard.

A mooring field, O’Reilly says, would extend the city’s ability to manage not just city waters, but the leased state waters upon which the moorings sat. It would also give the city latitude to enforce 100 yards in every direction outside the mooring field.

Until then, though, Gulfport police say they will continue to investigate complaints and remain open to making sure they’re doing everything they can to protect Boca Ciega Bay.

“Although I have been doing this job a long time, I do not claim to know it all; the statutes and rules are many,” Burkhart said. “If you are able to find something we are able to enforce, as always we will take action to ensure our waters are safe, clean, and enjoyed by all for years to come. 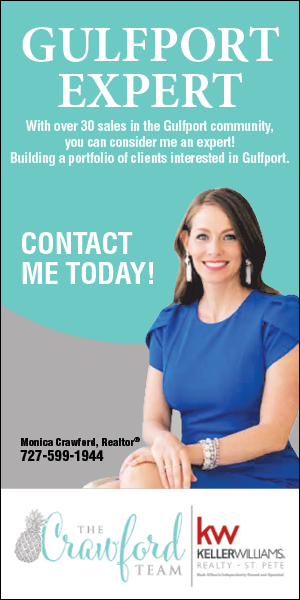