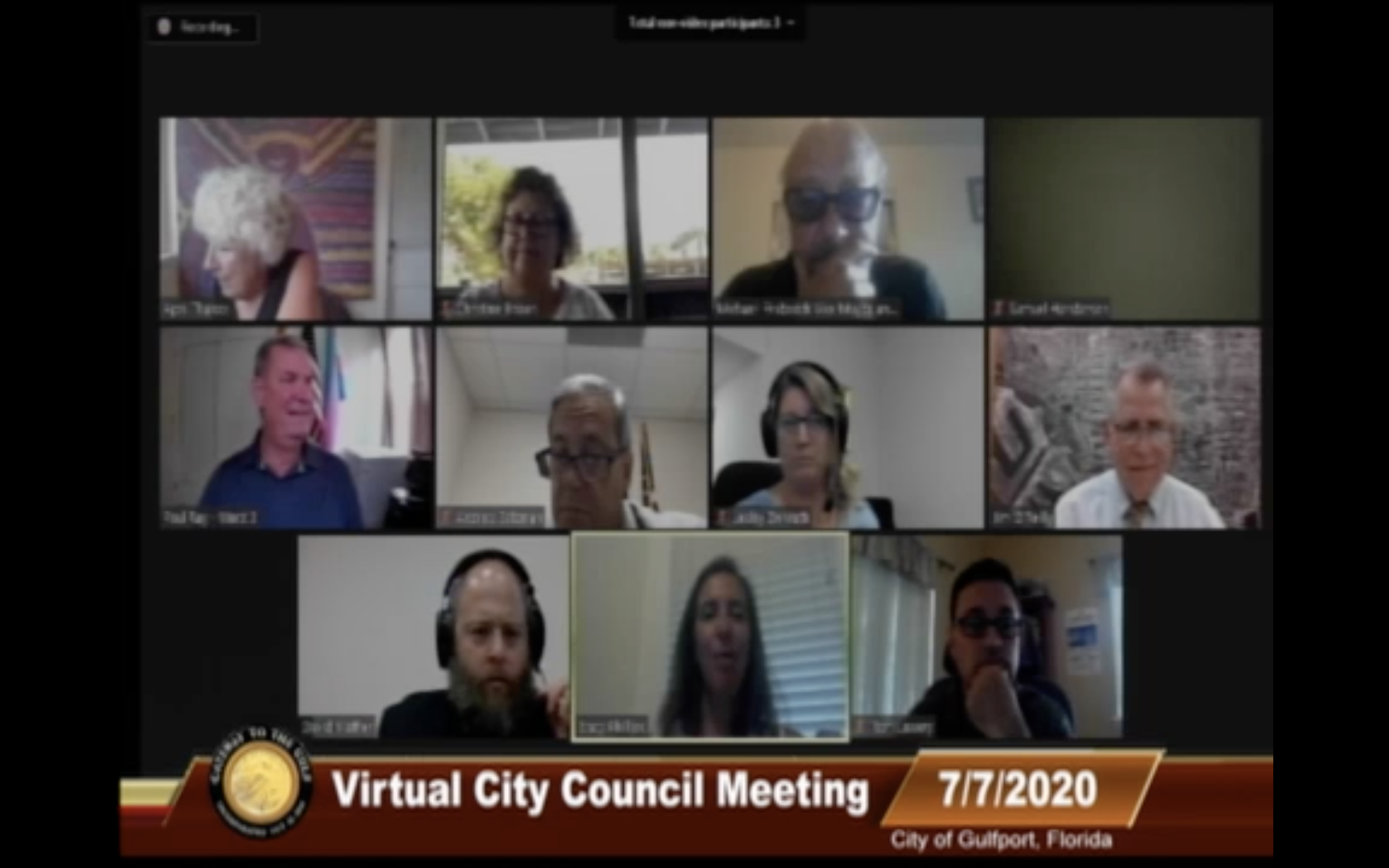 Correction: The Gulfport City Council meeting scheduled for July 21 will be in person at Gulfport City Hall. A previous version of this article misstated the location. The Gabber apologizes for the error.

At the Gulfport City Council meeting on Tuesday, July, 7 at 6 p.m, councilmembers adjusted their initial views on several city beautification projects in an effort to keep money available for emergencies in 2021.

In light of current social distancing measures, the City of Gulfport made public meetings such as council available four different ways: Live stream on the city’s website, Gulfport TV 640 (Spectrum only); dial-in by phone and the Zoom app, which is available for PC, Mac, iPad, iPhone or Android devices.

The city’s $125,000 proposed budget to renovate the Chase Park tennis courts at 27th Avenue and 54th Street has been suspended. City staff will look into less expensive options for repairs or resurfacing as opposed to replacement.

Council decided that additional Gulfport City limit signage for 49th St S. will be the blue and white wooden signs. According to City Manager Jim O’Reilly the blue and white design is more cost effective to install and to repair as opposed to the other option, the ceramic signs that mark Gulfport’s Waterfront District.

“Are you talking about the signs on 49th street?” asked Vice Mayor Michael Fridovich. “Oh yeah blue and white for sure, you never know who’s going to run into something there.”

Fridovich, backed by Councilmember April Thanos, then asked council to consider holding off on adding two K-9 units to the Gulfport Police Department until next year. Council decided to keep the suggested $32,000 allotted to the GPD for the K-9 units.

City of Gulfport Director of Finance Cheryl Hannafin explained the city’s intent for returning money previously estimated for projects. In short, the city chose to go with a less expensive bid for $376,137.50 to reline four storm culvert pipes that run underneath the Pasadena Yacht and Country Club Golf Course.

Thomas Lawery, Manager of Wholesale and Renewable Energy and Stacy Phillips, CEC Program Manger with Duke Energy provided an overview of the Clean Energy Connection Program. The full presentation can be seen here on the City of Gulfport’s website.

Resolution No. 2020-35, authorizing the city manager to enter into Operational Lease Agreements with Ricoh USA for copiers services and Epson large format scanners.

Resolution No. 2020-36, authorizing the city manager to enter into a contract with Miller Pipeline, LLC to reline the four (4) 48″ storm culvert pipes running underneath the Pasadena Yacht and Country Club Golf Course and authorize the associated budget amendment.

In order to keep people accountable for their words and actions, council agreed to review Ordinance No. 2020-02: First Reading – An Ordinance amending Chapter 26-2 Civil Rights Definitions, by providing for the definition of Bullying and Cyber-Bullying.

$32,000 in utility credit has been granted to 43 small businesses in Gulfport.

On Friday, June 26, 205 residential utility accounts were reported due for shut off for delinquencies.

As of Tuesday evening July 7, 149 of the delinquent account holders had contacted the city for bill resolution.

Hannafin reported that 51 of those 149 accounts had applied for the city’s R3 program.

Masks and social distancing will be required.

“The doors will stay open as well,” said City Manager Jim O’ Reilly. “And I will talk to the fire chief about checking temperatures at the door too.”

City Hall will be used for polling on August 18, so the meeting on that date was rescheduled for Wednesday, August 19 at City Hall.

The September 1 meeting will be rescheduled for Thursday, September 3.

The meeting scheduled for November 3 was canceled. The November 17 meeting will be the only meeting in November.

Overheard at the Virtual Council Meeting

“I would love the splash pad, but we just can’t afford that.” – Councilmember Paul Ray during the budget review.

“We could cancel the $30,000 for the decorative tree lighting.” – Councilmember April Thanos submitting ideas to decrease spending in 2021.

“Feels like the time to be frugal.” – Mayor Sam Henderson during budget discussions.

“The intent of the ordinance was to not have people pay double taxation and licensing.” – City Attorney Andrew Salzman when addressing the recent signing of HB 1193. (City Manager Jim O’Reilly will address changes to state food truck regulations during the July 21 council meeting.)

Stay tuned for more Gabber coverage on HB 1193: Deregulation of Professions and Occupations.