Close to sunrise, a St. Petersburg man riding his bicycle on 64th Street South near the intersection of Bougainvilla Avenue South was struck and killed on Thursday, January 10.

According to the St. Petersburg Police Department, Sheldon Wagner Jr., 64, of 880 Oleander Way S., Apartment 802, was northbound on the west side of the southbound lane of 64th Street S. when he made a sudden attempt to cross the street to the east side resulting in a collision with a 2008 Nissan Ultima at 7:22 a.m.

Wagner was transported to Palms of Pasadena Hospital where he was pronounced dead at 8:02 a.m.

Lakeba Brown, who was not able to react fast enough to avoid Wagner, according to police, was driving the Nissan.

During the investigation that closed Bougainvilla in both directions, Brown fully cooperated with police and she will not face any charges, said Public Information Officer Yolanda Fernandez.

A sampling of police reports from January 3 through January 12 in Gulfport, South Pasadena and St. Pete Beach.

Before sunrise on Monday, January 14, two vehicles collided at 1st Avenue South and 48th Street leaving both drivers with life-threatening injuries, according to St. Petersburg Police.

Shortly after 5 a.m., a 2001 Toyota Tundra driven by Joseph Caradonna, 23, was traveling eastbound on the avenue in the center lane. Kerry Rashad, 28, was traveling southbound on the street in Independent Cab number 69, which is a 2002 Mercury.

According to police, Rashad failed to yield and struck Caradonna’s pickup truck resulting in his taxicab spinning a few times before it came to rest at the south curb of 1st Avenue South.

Caradonna continued eastbound in his truck on the avenue but veered off the road and crashed into two trees at 4720 1st Ave. S.

Both drivers were seriously injured and the crash remains under investigation, said Yolanda Fernandez, the public information officer for the police department.

1/3 – Fraud in the 5400 block of 30th Avenue South. A resident reported that his bank account was compromised and money was withdrawn from it.

1/3 – Warrant arrest in the 3000 block of 49th Street South. James Antoine was arrested for an outstanding warrant for violation of probation and transported to the Pinellas County Jail.

1/4 – Drug possession in the 5300 block of 31st Avenue South (Veteran’s Park). Officer Nicita made contact with four individuals in the park and one of them had been smoking marijuana. The man was eligible for the Adult Pre-Arrest Diversion (APAD) program and was given a referral.

1/4 – Grand theft in the 2500 block of Beach Boulevard. A resident reported that he’s selling an engagement ring and allowed an interested buyer to take the ring to show it to his girlfriend. The interested buyer did not return.

1/5 – Arrest on warrant in the 2800 block Beach Boulevard. Ralph Cleveland was arrested for an outstanding trespassing warrant out of Pinellas County. He was transported to the Pinellas County Jail.

1/6 – Hit and run crash/driving under the influence at 6200 Gulfport Boulevard South. Officer Marshall rolled up on a hit and run that had just occurred where a white male in a Ford Taurus ran the stop sign at 62nd Street and hit the back of a Honda Civic travelling east on Gulfport Boulevard.  The driver of the Ford fled the scene eastbound, but the victim got a good look at his face. About an hour later, Officer Nicita spotted the suspect vehicle in the neighborhood near Stetson. It turns out that the driver was intoxicated and had marijuana and methamphetamine in the car. Domenick Scotti was arrested for driving under the influence, hit and run, possession of marijuana, possession of methamphetamine and possession of paraphernalia. Scotti’s breath test results: 0.097/0.097. He was transported to the Pinellas County Jail.

1/6 – Theft in the 1600 block of 58th Street South. A resident reported that she left her wallet on the counter at the mini mart the night before. Video showed two white males in their 50s walking up and taking the wallet from the counter.

1/7 – Traffic arrest at the corner of Gulfport Boulevard South and Gray Street South. Sergeant Vandenberg stopped a vehicle for speeding. The driver, Breanna Thompson, admitted she did not have a valid license and had multiple prior suspensions for failure to appear on criminal citations.  She was arrested and transported to the Pinellas County Jail.

1/7 – Fraud in the 1100 block of 53rd Street South. A former resident called to report that someone possibly forged a document to a home she owns in Gulfport that was in foreclosure.

1/8 – Crash in the 5300 block of Gulfport Boulevard South. A vehicle backed out of the flower shop and quickly accelerated across four lanes, left the roadway and struck a palm tree. The driver was transported to the hospital with minor injuries.

1/8 – Burglary to a vehicle in the 900 block of 60th Street South. A wallet was taken from an unlocked vehicle sometime overnight.

1/9 – Warrant arrest in the 5100 block of 11th Avenue South. A juvenile was arrested for violating court ordered curfew.

1/9 – Warrant arrest in the 1200 block of 60th Street South. Indian Shores Officer Bittrich requested that Gulfport officers respond to an address in Gulfport to attempt to locate Nicholas Arthur. Bittrich had probable cause for Arthur’s arrest for aggravated battery and witness tampering. Officers located Arthur and arrested him. Arthur was transported to the Pinellas County Jail.

1/3 to 1/9 – The marine unit was on the water for approximately 25 hours during this period. Marine unit officers had contact with 25 boaters and conducted several foot patrols at the Casino dock due to complaints about visitors creating disturbances there. 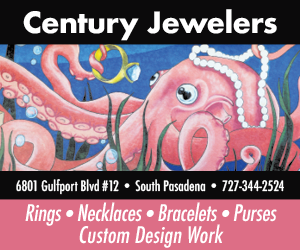